The use of mud treatments has a long history. Even in ancient times people used to rub painful places with various forms of sludge or mud. People in the Mediterranean region still use sea mud pools that attract thousands of tourists. It is estimated that every year as many as fifty million Europeans benefit from a variety of mud treatments.

Even more popular are the mysterious mud volcanoes: during their activity phases they release tons of grey hot mud which is later used for healing and beautifying purposes. Such volcanoes are abundant in Azerbaijan, Colombia, and Romania. Many have heard about the sludge from Israel’s Dead Sea which is even sold in pharmacies as a medicinal product or as a cosmetic.

Different varieties of mud or sludge can have different colours and odours. However, they act similarly, firming and softening the skin and treating rheumatism, psoriasis, and inflammations. 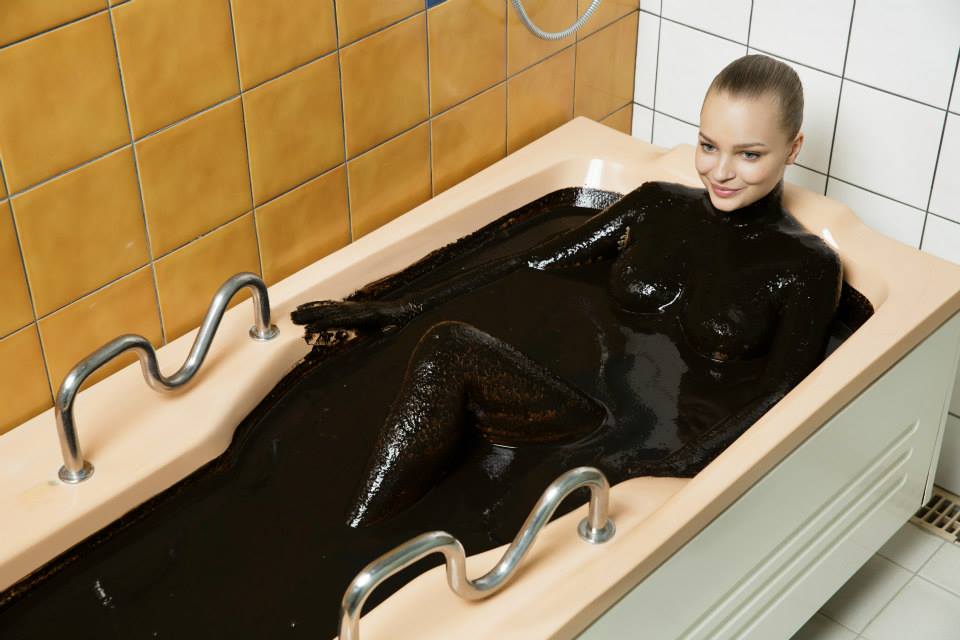 The healing mud that is used in Druskininkai is very dark, virtually black, and it reaches healing centres from peat quarries that are located within the resort area. In order to be used in baths, the mud is crushed, sifted, mixed with mineral water, and heated to between 36-39oC. It may be a little scary to have to climb into such a bath for the first time, but once you lie down your body will be filled with warmth and a sense of relaxation. Druskininkai’s mud carries no unpleasant smells with it.

Have the healing properties of mud been scientifically proven? Yes. The popularity of mud treatments (scientifically known as pelotherapy) has encouraged scientists to research this form of therapy. Most of the research that has come out of such studies was conducted in the twentieth century. In Druskininkai this was carried out by the Lithuanian Centre of Balneological Research.

In 2014, forty doctors from Spain, Italy, and Argentina analysed all of the available pelotherapy research that had been described in worldwide medical literature and came to one conclusion: mud treatment has a significant effect upon human health and should be recommended by doctors as a cheaper and more natural substitute for some forms of drug treatment.*

It is said that mud treatments are effective when treating chronic inflammations, allergies, autoimmune diseases, and diseases that are associated with the joints, muscles, digestive system, and the peripheral nervous system, plus gynaecological and urological diseases. These treatments have virtually no side effects and are suitable for holidaymakers of any age from eighteen years upwards.**

**Prior to treatment always consult your doctor.

How Cheese is Made?

Magic in the Water